At the club’s first AGM in April 1868, it was reported that income for the year had amounted to a total of £3 9s 6d and that expenditure had exceeded that sum by 12s 8d. A major obstacle confronting the new club was the lack of anyone to play against. The need to have matches against other clubs, rather than simply organise games between the members, was discussed. Feelers were put out and two challenges were received – the first from the newly-formed Ayr Football Club and the second from Thistle Football Club. The cost involved and the fact that Saturday was a working day in 1868 ruled out a trip to .  However, as Thistle played at Glasgow Green, a couple of miles or so from Queen’s Park, their challenge was accepted. Little is known about Thistle, other than that the club had disappeared by the early 1870s.

The letter from the new Queen’s Park secretary, Robert Gardner, accepting the Thistle challenge is thought to be the oldest football letter in existence. Gardner suggested that the game should be 15-a-side and last for no more than two hours. The game took place in the Queen's Park Recreation Ground on Saturday 1 August 1868. Queen’s Park won 2-0 but nothing else is known about the encounter.

The members regarded football as a summer game and no further matches took place in 1868. Two matches were provisionally arranged with Hamilton Gymnasium but neither came off.

In April 1869, the Secretary was asked to contact the Hamilton Gymnasium Club once again about the possibility of a match. A game was arranged and took place at the Recreation Ground in Hamilton on Saturday 29 May 1869. The Recreation Ground was located in (now ) close to the present New Douglas Park. Queen’s Park won the game by four goals and nine touches down to nil.

The Victorians were very fond of poetry and Queen’s Park member Mr H N Smith penned a poem in celebration of Queen’s victory. The last of the 21 verses read: -

Loud the acclaim that ends the game;
The Queen’s Park men have won!
So well they wrought, so well was fought,
And not too cheaply victory bought –
Right well in sooth ‘twas done!
The laurel they may proudly wear
Which from that field of fight they bear.

A return match with Hamilton Gymnasium took place at the Queen’s Park Recreation Ground on 14 August 1869, with Queen’s Park winning 2-0.

Queen’s Park continued to have difficulty finding clubs to play against but managed to arrange four matches in 1870. The first of these games was against Airdrie FC at the Queen’s Park Recreation Ground on Thursday 23 June 1870. Airdrie, affectionately known as the Hammer Drivers, was a side composed of players with Irish connections. The game was 14-a-side and was watched by a “large and respectable assemblage of spectators”. Queen’s won 4-0 with goals from J Carson, W Wotherspoon, J Broadfoot and James Smith.

Queen’s second match in 1870 took place in the Queen’s Park on Saturday 9 July, according to Richard Robinson. However, the match report did not appear in the North British Daily Mail until Tuesday 19 July. Could it be that the actual date of the match was Saturday 16 July? Whatever the date, Queen's Park's opponents were Drummond, a club made up largely of lads from Perthshire. Queen’s won with a goal from David Wotherspoon and a touch by Robert Smith.  Drummond turned up two men short and two pupils from the Deaf and Dumb Institution made up the numbers. 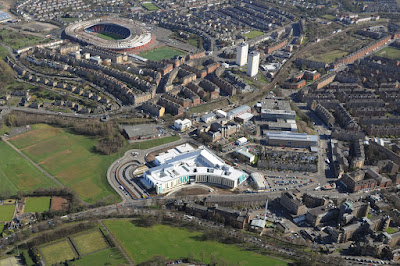 A return match with Airdrie took place on the afternoon of Tuesday 20 September in the in Airdrie before around 1,000 spectators. Queen’s Park won by three touches taken by James Smith and David Wotherspoon (2). The Airdrie players were jubilant at running Queen’s so close. The Advertiser for Airdrie, Coatbridge, Bathgate and Wishaw reported - “At the close both clubs adjourned for refreshments, and a very social evening was spent with songs, recitations, etc. – the ultimate good feeling prevailing.”

On Saturday 24 September, Queen’s Park met Hamilton Gymnasium for the third time. The game was played in . It was 15-a-side and lasted for 90 minutes. Queen’s won 4-0 with goals from William Keay, John Wotherspoon, Robert Fawns and David Wotherspoon.

The Club had not forgotten its athletic roots and arranged a hare hunt over a heavy and hilly eight mile course in Queen’s Park on Saturday 15 October 1870. The Glasgow Herald described this as a “fitting opening to their winter season”. This was a paper chase. No animals were harmed.

Queen’s Park and Hamilton Gymnasium met once again in the Queen’s Park Recreation Ground on Saturday 29 October 1870. This was to be the final match between the two clubs as the Gymnasium then went into steady decline. Queen’s won 3-0 with goals from William Keay (2) and James Little after an hour's play.  Interestingly, Queen’s Park played with 14 men and Gymnasium with 18.

On 3 November 1870, a letter from Charles Alcock, Secretary of the Football Association, was published in the Glasgow Herald, asking for the names of any Scottish players who would be interested in taking part in a match between and a Scotland XI at the Kennington Oval on Saturday 19 November.  Queen's Park nominated club member Robert Smith, who was working in London. Smith reported back to the club that the Football Association in had placed an outright ban on handling. Queen’s immediately adopted this rule and joined the Football Association. When the FA Cup was established in the following year, Queen’s Park contributed a guinea towards the cost of the trophy.

Without fixtures, the future of the club appeared bleak but season 1871/72 proved to be a real turning point in the fortunes of Queen’s Park and Association football in .