Queen's Park opened season 1895/96 on Saturday 22 August 1895 with a match against Ayr Parkhouse at Beresford Park in Ayr. A far from full strength Queen's side won 4-0, with goals from Tom Crookston, Harry Dinsmore, Bob McColl and William Dinsmore. A week later, Port Glasgow Athletic were visitors to Hampden Park. A crowd of around 1,000 saw a considerably understrength Queen's Park eleven win by six goals to one. The scorers are not entirely clear but they appear to have been Tom Crookston (4), James Irons and one of the Dinsmores.
Queen's Park faced somewhat tougher opposition on Saturday 5 September with a match against Renton at Hampden Park. A crowd of 2,500 was present for a close match that ended in a 1-1 draw. Renton took the lead through Bob Johnstone in 40 minutes. Queen's, playing with the wind in the second half, pressed the Renton defence and equalised in 75 minutes through Harry Gray. 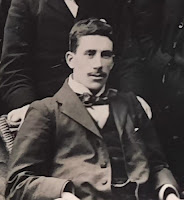 David Stewart
On Saturday 23 November, Queen's Park met Edinburgh side St Bernard's in a friendly match at Hampden Park. A well-contested first half finished goalless, with Willie Lambie closest to breaking the deadlock with a shot that struck the post. The Spiders had the better of the second half and eventually took the lead through Willie Lambie, following fine play by Bob McColl. Just before the end, St Bernard's broke away and Robert Laing made the final score 1-1 from a scrimmage.
A week later, Queen's Park played Wishaw Thistle before a big crowd at the Old Public Park in the Lanarkshire town. The game was restricted to two halves of 35 minutes. Without over-exerting themselves, Queen's won 5-2 on a difficult pitch. Unsurprisingly, the names of the goalscorers varied from report to report. The Wishaw Press opted for McColl (3), D Stewart and Lambie.
The annual match between Glasgow and Sheffield took place at Third Lanark's Cathkin Park on Saturday 7 December. Kenny Anderson, Hughie Smith, John Gillespie, Bob McFarlane and Willie Lambie were in the Glasgow side. Lambie scored the first goal in a 3-1 victory. Meanwhile, Queen's Park, without the five players on representative duty, travelled to Kilmarnock to play Kilmarnock Athletic at Holm Quarry. Due to the late arrival of the Queen's Park party and failing light, only an hour's play was possible. The Holm Quarry ground was in a pitiful state after a storm the previous week, with fences broken down and the grandstand smashed, and there were only a couple of hundred or so spectators present. A Queen's Park side, containing only three of the regular first eleven, won 2-1. Bob McColl scored both goals.
On Saturday 14 December, Queen's Park met Hibernian at Hampden Park. The weather was wet and there was only a small crowd present. Queen's had the better of the early play on a heavy and difficult pitch and took the lead in 25 minutes when Bob McFarlane found the net after a fine move. Shortly afterwards, Bob McColl scored a second. Due to failing light, only 40 minutes was played in the first half and the teams did not leave the pitch at half-time. The rain came down in torrents in the second half, spoiling the game. John Ferguson pulled a goal back for Hibs and the Edinburgh side came close to an equaliser but the final result was a 2-1 victory for Queen's Park.
On the Saturday before Christmas, Queen's Park made their second visit of the season to Barrowfield Park for a friendly encounter with Clyde. Queen's fielded what was described as a "mixed eleven". It was a foggy day and, due to the likelihood of visibility becoming increasingly difficult, only two halves of 35 minutes were played. Clyde held a 2-0 lead at the interval, with goals from Stewart and Alex Crawford. Queen's Park had a better second half but passed up a number of chances. They were made to play for their profligacy when James Young scored a third for the Bridgeton men before the close. Queen's Park were not happy with the ball supplied by Clyde, considering it not suited to the hard ground. 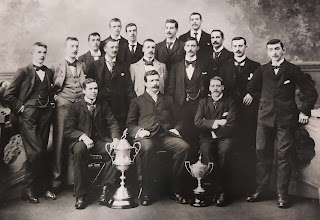 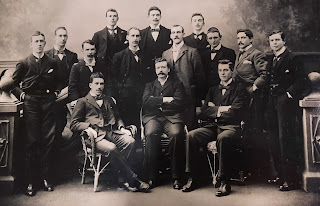 The season finished as usual with the Glasgow Merchants' Charity Cup. The four clubs invited to participate were those involved in the Glasgow League. Queen's Park had been drawn against Third Lanark in the first round, or semi-final, of the competition. The attendance of 10,000 on Saturday 2 May at neutral Celtic Park was seen as disappointing. David Stewart returned to the Spiders' line-up. Bob McColl opened the scoring for Queen's but goals from John Dunlop or William Garside and James Steel put Third Lanark into a 2-1 lead. Willie Lambie drew the sides level at half-time with a terrific shot. The match looked like ending in a draw after 90 minutes but, just as extra time loomed, Willie Lambie popped up with the winning goal to give Queen's a slightly fortunate victory. The Scottish Referee reported, "A large number of ladies occupied a prominent position on the grand stand, and when the Queen's scored in the last second of the game they waved their handkerchiefs, and showed every manifestation of feminine joy."
At the AGM of the SFA on Tuesday 5 May, it was agreed that goal nets would be used in the semi-finals and final of the Scottish Cup.
Queen's Park's final match of the season was the Glasgow Charity Cup Final against Celtic at Ibrox Park on Saturday 16 May 1896. The Spiders team at Ibrox was - K L Anderson; J Gillespie and H F Smith; J Allison, R McFarlane and D Stewart; T Crookston, T S Waddell, R S McColl, J Cameron and W A Lambie. The weather on the day was extremely warm and the pitch very hard. Celtic, with the benefit of a stiff breeze, took the lead in 10 minutes when Sandy McMahon fired home a tremendous shot. Queen's Park dominated the second half and equalised in 75 minutes when Willie Lambie beat two men before slotting the ball into the net. At the end of the 90 minutes, the score was one apiece and extra time was played. Queen's Park were badly handicapped in extra time when they lost Bob McFarlane to a head injury. Just at the end of the first 15 minute period, Allan Martin scored to win the match for Celtic. It was the fifth year in a row that the Parkhead side had lifted the trophy.
The Queen's Park AGM took place on Thursday 28 May. William Sellar was re-elected President and it was reported that the balance in the bank stood at £1,432 2s 1d.
Queen's Park's second eleven, the Strollers, finished off a fine season by beating Rangers 3-0 in the Glasgow Reserve Cup Final on Thursday 28 May. The Strollers had, of course, already won the Scottish Second Eleven Cup and finished in third place in the Scottish Reserve League.
Results 1895/96