In 1872, National or Athletic Games were held in towns and villages all over Scotland and Queen’s Park decided to organise their own Sports. The Sports began on Tuesday 30 July and continued every Thursday and Tuesday until Tuesday 13 August. The competition was open to all football and cricket clubs in Queen’s Park and district but the only outside entries came from the Granville Cricket Club.  Despite this modest beginning, the Queen’s Park Sports were to go on to become one of ’s leading athletics events.
At the beginning of season 1872/73, Queen's Park had 65 members and funds of £7 17s 1d.

Queen’s began their football season with a 10-a-side game against Airdrie at the Queen’s Park Recreation Ground on the evening of Wednesday 28 August 1872. Queen’s won 6-0 with goals from James Thomson, William Ker (2), James "Jimmy or Jamie" Weir and Willie Mackinnon (2).

This match in late August 1872 was the third and last recorded fixture between Queen’s Park and Airdrie FC. However, The Book of Airdrie, published in 1954, states - “Queen’s Park were frequent visitors to Airdrie in those days for friendly games, at the end of which pies and porter were supplied for the refreshment of the players.” It could be that there is some truth in this.

Although the fixture list was fuller, there were not games every Saturday. Indeed, the next match was not until Saturday 19 October when Queen’s beat Granville 4-0 in the Queen’s Park, with goals from Bob Leckie, one of the Wotherspoons and Alex Rhind (2).

Vale of Leven were the next side to visit the Recreation Ground on 21 December.  This was Vale's first ever match.  Queen's Park had heard that the young men of Alexandria were intending to take up rugby and asked them to reconsider.  Queen's travelled to Alexandria and gave an exhibition of the "dribbling game".  The local lads were impressed and they decided to form an Association club, which they named Vale of Leven.  Queen’s won the game 3-0 with goals from Jimmy Weir (2) and Alex Rhind.  The Queen's Park team was - William Ker, Joe Taylor, David Wotherspoon, James Thomson, Jimmy Weir, Bob Leckie, Alex Rhind, Willie Mackinnon, Andrew Spiers, William Keay and Archie Rae.

A return match with the Vale took place on Saturday 11 January when Queen’s Park opened Vale’s first home ground – Cameron’s Park in Alexandria. The North British Daily Mail reported - “There was a large assemblage of spectators – the entire parish seemingly turned out to witness the play.” A well-contested match ended 0-0.

On Saturday 25 January 1873, Queen’s Park were scheduled to play Granville and the Second Eleven should have been at East Kilbride. It appears that neither match took place, presumably because of bad weather.

A third encounter with the Vale of Leven came off in the Queen’s Park on Saturday 15 February.  Queen’s dominated throughout but could not score and the match finished goalless. Queen’s pushed hard for a winner in the closing stages and, in the words of the North British Daily Mail, “The excitement among the 600 spectators during these few minutes was so keen that they surged five or six yards within the line of flags on both sides, sorely hampering wing players and spoiling the play.”

The Second Eleven did not return to action until 22 February when they won 1-0 away to East Kilbride on a pitch that resembled a ploughed field. The home goal led a charmed life and the Queen’s Park defence was never threatened. The North British Daily Mail commented that the Queen’s goalkeeper Macmurray “who at the immediate risk of being frozen to the spot, nobly refused to leave his post, but, like the vaunted Pompeian sentinel of old, sacrificed self to duty and nearly necessitated R.I.P.”

On Saturday 1 March, Queen’s Park met Vale of Leven yet again – this time in Alexandria. The match excited immense interest in the district and no fewer than 1,500 spectators were present.  Queen’s won 1-0, despite playing a man short.
By the spring of 1873, Queen's Park were actively seeking to acquire a private ground. The club had no real right to the area of the Recreation Ground on which they played and there were no changing facilities. The Glasgow and Paisley Joint Railway Company said that Queen's could have ground near Dixon's Works at the top of Crown Street but on condition that they moved out when asked to do so by the railway company. They decided against this option and Club Secretary Archibald Rae then wrote to Glasgow Town Council applying "for the use of that field on the east side of Cathcart Road immediately fronting Hampden Terrace, Mount Florida, which is now let for grazing."

There were over 1,000 spectators in attendance in the Queen's Park for the last match of the season on 5 April 1873 when Queen’s Park beat Glasgow Wanderers 1-0. Robert Gardner, who normally kept goal, scored the only goal of the game.

Any reference to season 1872/73 would, of course, be incomplete without mention of Queen’s Park’s role in staging the first ever official international football match. Queen’s proposed to Charles Alcock, Honorary Secretary of the Football Association, that one of two England v Scotland matches planned for each season be played north of the border. Alcock agreed, with certain conditions, and Queen’s Park, with little money in the bank and no ground of their own, assumed responsibility for staging the match. 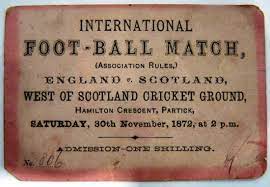 Match ticket
The match took place on Saturday 30 November 1872 in the Burgh of Partick at Hamilton Crescent, the home of the West of Scotland cricket and rugby teams, and was a great success. The Scotland side, wearing the dark blue of Queen’s Park, were very much second favourites but battled determinedly to achieve a notable scoreless draw.

All eleven players were members of Queen’s Park, although William Ker also played for Granville and the two Smiths for South Norwood in London. However, it had not been the intention to exclude players from other clubs. Significant efforts had been made to widen the pool of players from which the team would be selected. As early as March 1872, The Scotsman published a letter from Queen’s Park inviting players in Edinburgh to express an interest in taking part in the following season’s Scotland v England match. A further letter from the Hon Secretary of Queen’s Park was printed in The Scotsman inviting players wishing to take part in the forthcoming Scotland v England match to send him their names.

Three weeks before the International, a trial match took place in the Queen’s Park. Players from the Glasgow Academicals and West of Scotland rugby rules sides had been expected to attend but only Accies’ players turned up. One of these players, Thomas Chalmers, who went on to become a famous rugby international, was said to have proved a splendid goalkeeper. However, none of the rugby men eventually took to the field against England, possibly because the inter-district rugby match between Glasgow and Edinburgh clashed with a practice match in Queen's Park on Saturday 23 November and/or the fact that Glasgow Accies had a fixture with Edinburgh Academicals on the day of the International. It had been hoped that Thomas Chalmers would make himself available to play in goal but he declined "fearing that his imperfect knowledge of the rules might mar Scotch play". 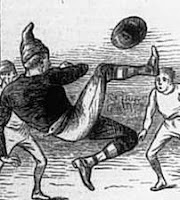 While the Wanderers versus Queen’s Park match earlier in the year had created an increased interest in the Association game, the Scotland v England match resulted in a real upsurge in the number of people playing the game and spectating at matches.

On Saturday 8 March 1873, the Scots took on England again, this time at the Kennington Oval in London. Three players from English clubs were included in the Scotland line-up and this seemed to upset the balance of the side. The Queen’s Park players who featured in a 4-2 defeat were Robert Gardner, William Ker, Joe Taylor, Robert Smith, David Wotherspoon, James Thomson and Willie Mackinnon. The scorer of Scotland’s second goal, William Gibb, was described as being a member of both Queen’s Park and Clydesdale.  It is unclear which was his principal club at the time.

Queen’s Park had again entered the FA Cup competition and had been freed from competition until the last two drawings, i.e. the semi-finals. Queen’s were drawn against in the semi-finals. The match was to be played on the Monday after the England v Scotland match but Oxford could not play on that date. Queen’s scratched from the competition, even though they were entitled to claim the tie.

Football really took off in in season 1872/73 but not everyone was impressed by the new game. A report in The Scotsman read - “As compared with the Rugby game, the Association one is remarkably tame, all the excitement connected with running, dropping, charging, and place-kicking, being conspicuous by its absence, and unless some considerable changing were taking place in the Association style of play, there was very little chance of the leading Scotch clubs leaving their first love – i.e. the Rugby code.”