In the 1860s, the Glasgow conurbation was expanding rapidly. The suburban areas to the south of the city boundary, such as Crosshill and Queen’s Park, were populated in the main by people who were not native Glaswegians. Often they were young men, with a good standard of education, who had come to the city to seek their fortune. The south side of Glasgow was a favourite place of residence for such youths.

Sporting activity in the 1860s was very different from that of today. Probably, the most popular pastimes were quoits and draughts. Cricket was played in the summer and two rugby teams – West of Scotland and Glasgow Academicals – had been established in the city in 1865 and 1866 respectively.  However, the only sport involving any great degree of physical activity which took place on a widespread basis was what was termed National Games, a sort of combination of modern-day track and field athletics and the athletic events associated with Highland Games. This was the nature of sport in Glasgow when a group of young men met to set up a football club.

Until around the time of the First World War, it was generally believed that Queen's Park Football Club had emerged directly from the Young Men's Christian Association (YMCA). However, James Grant, a founder member of Queen's Park, who was by then around 70 years of age, provided fresh information about the origins of the club. He told how a group of young men from northern Scotland used to gather together on Saturday afternoons on a small triangle of spare ground near Lorne Terrace in Pollokshields to practise the sports they had taken part in at school, such as throwing the hammer, jumping and putting the weight (generally a big stone). Lorne Terrace is at the junction of Nithsdale Road and Darnley Street.  It is not clear how they all met. Some of them, possibly most of them, would have known each another before coming to Glasgow. Founder members James Grant and Lewis Black, for example, had connections with the fishing village of Portnockie on the Moray Firth and probably also had family connections. Also, in an article in the Daily Record on 19 July 2013, Andy Mitchell reported that three other founder members, Robert and James Smith and William Klingner, attended the same school - Fordyce Academy in Aberdeenshire.

The piece of ground used by the young sportsmen was too small and was to be developed so they had to find a new place to train. The location they selected was the Queen’s Park Recreation Ground at the eastern end of Queen’s Park, or as it was often known the South-side Park. It is believed that the spot they used was around the site of the new Victoria Infirmary building, in front of the Deaf and Dumb Institution which is now an apartment block. (At a later stage, the fledgling Queen’s Park club kept their goal posts, flags etc in the Deaf and Dumb Institution.) Once they became established in the Queen’s Park, the group was augmented by young athletes from other parts of Scotland, such as Ayrshire and, indeed, Glasgow itself.

According to James Grant, as the young men were practising their athletics, a group of 40 to 50 boys, aged 15 to 19 years, moved towards them kicking a ball about. They asked the boys, who were from a local branch of the YMCA, if they could join them for a game. They decided that night to get a football and contributed 6d (2½p) a head towards the cost. On the following Saturday, they took the ball to Queen's Park for a few hours' play and several new men joined them. A meeting was quickly arranged to form a football club.

In James Grant's account of the beginnings of Queen's Park FC, the YMCA has no more than a peripheral role. However, Mungo Ritchie, the first President of the club, when interviewed at the age of 78, supported the version that Queen's Park was born within the folds of the YMCA, but later agreed that the connection with the YMCA ended after that single game they played together. In the Scottish Football Annual for 1880/81, an 'Old Black and White', who appeared to be an original member of the club, spoke of members of the YMCA meeting "many a time and oft" in the South Side Park to enjoy a friendly kick. He appeared to be implying that these were among the individuals who formed Queen's Park. Archibald Rae, in his Secretary's report to the Queen's Park Annual General Meeting in 1874, referred to - "The muscular Christianity to which we owe our existence, for we were evolved from the YMCA, was not always in favour." It is difficult to know how to interpret the word "evolved" in the context of Mr Rae's report. However, although some of James Grant's recollections were not entirely accurate, it seems reasonable to assume that what he had to say was broadly correct. Nevertheless, there can be little doubt that there was some degree of YMCA involvement. One of the aims of the YMCA was to provide low-cost housing in a safe Christian environment for young men travelling from the countryside to the cities. Could it be that the YMCA provided such help for some of the lads who formed Queen's Park? On the other hand, a second aim of the organisation was to improve the spiritual and physical condition of young men to preserve them from the temptation of alcohol.  Given that Queen's Park held their meetings in licensed premises and that the players were known to drink alcohol, it would appear that any direct YMCA connection was limited. The best guess might be that seeing the YMCA lads play football inspired James Grant and friends to form a football club and that some of the YMCA lads joined them in the endeavour. We will never know for sure.

The meeting to form the new football club took place on Tuesday 9 July 1867. According to the minutes, the meeting took place at 3 Eglinton Terrace, which was a private residential address a short distance from the main gates of Queen's Park. However, it has long been the belief that the meeting actually was held in John Dick's public house, at the junction of what is now Victoria Road and Allison Street. One theory is that, as it would not have been considered respectable to hold a meeting in a public house, the adjacent residential address was recorded in the minutes instead. The address of Dick's public house (later James White's) would have been 1 Eglinton Terrace but the Post Office Directory for Glasgow for 1867/68 makes no mention of a public house at that location. It was not until the 1869/70 edition of the Directory that the public house appeared and the address was indeed 1 Eglinton Terrace. The proprietor was named as James Cook, spirit dealer. Although the Post Office Directories probably did not include all business and commercial properties as there was a cost involved, it would have been expected that wine and spirit merchants would feature. It is known that some of the houses or flats in Eglinton Terrace were rental properties. Indeed, the Smith brothers and William Klingner lodged at 22 Eglinton Terrace. There is no record of the exact "number of gentlemen" who met on 9 July 1867, but it is possible that they could have squeezed into a room in one of the flats at 3 Eglinton Terrace. In his book History of the Queen's Park Football Club 1867-1917, Richard Robinson states that the address of White's public house was 3 Eglinton Terrace. This is incorrect. It may well be that the meeting did take place in the public house at the junction of Victoria Road and Allison Street but it does seem a bit odd that a group of young men, at least some of whom had strong YMCA connections, would choose to gather in a public house a few yards from the gates of Queen's Park.

Based on entries in the Post Office Directory and newspaper advertisements at the time, it seems that the building that constituted Eglinton Terrace was constructed around the start of 1864. But is the tenement block that now sits on the west side of Victoria Road between Prince Edward Street and Allison Street the same as the one that was there in 1867 when Queen's Park FC was formed? If the present-day tenement block was the one built in the 1860s, 3 Eglinton Terrace would now be 404 Victoria Road. Numbers 400, 404 and 408 Victoria Road are Category B listed buildings and, according to Historic Environment Scotland, were erected around 1880. Why would substantial properties built in the 1860's be demolished less than 20 years later? Eglinton Terrace appears in the annual Glasgow Post Office Directory on a continuous basis throughout the 1870's, 1880's and 1890's. There was a change in the street numbering system for Eglinton Terrace/Victoria Road around 1877 and again around 1892 but absolutely nothing to suggest that the original buildings had been demolished and new tenements erected. 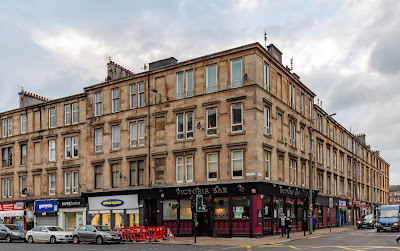 At that first meeting, 29 -year-old Mungo Ritchie, a native of Ardbennie near Crieff in Perthshire, was appointed President of the new club. There was considerable debate over the choice of name for the club. As the majority of the members came from the North of Scotland, names reflecting that fact were proposed. However, James Grant suggested Queen’s Park and this was adopted.

The Secretary William Klingner, a 19-year-old lad from Aberdeenshire, was asked to source a set of rules for football and he wrote off to Cassell’s Family Paper and Sporting Life. A copy of the Association Rules duly arrived from the famous cricketer James Lillywhite who had a sports shop in London. These were adapted to form the new club’s “Rules of the Field”. Under these rules, limited use of the hands was permitted. The ball could be fisted but not thrown and a fair catch could be taken and the ball kicked from the mark. (This approach remains to this day in Australian Rules football.) In addition, if the ball crossed the goal-line wide of the goal, touches (touchdowns) counted.