Season 1875/76 opened on Saturday 2 October with the visit of Kilmarnock to . The match ended in an easy 7-0 win for Queen’s Park. The scorers were Willie Mackinnon (2), Andrew Hillcoat (2), Jimmy Weir, David McGill and an own goal.

The Kilmarnock game was seen as a warm-up event for the visit of Wanderers to Hampden on the following Saturday. The Wanderers game, viewed as one of the most important in the football calendar, attracted the largest-ever crowd for a football match in Scotland. Between 11,000 and 12,000 spectators were in the ground, with thousands more watching from the adjoining parks and buildings.

Queen’s Park were without Angus McKinnon due to illness and drafted in Moses McNeil from Rangers. Several thousand cards, giving the names and positions of the players with their colours, were issued to spectators. Queen’s opened the scoring in six minutes through Jimmy Weir and went on to score a further four times to record a resounding 5-0 victory. Goals from Charles Campbell and Tom Lawrie made it 3-0 at half-time and Weir and Lawrie both scored again in the second period. The Glasgow Herald reported that, after Thomas Lawrie scored a brilliant third goal, “many of the onlookers, not content with cheering and waving their hats, tossed their head-gear into the air in the ecstasy of their admiration.” 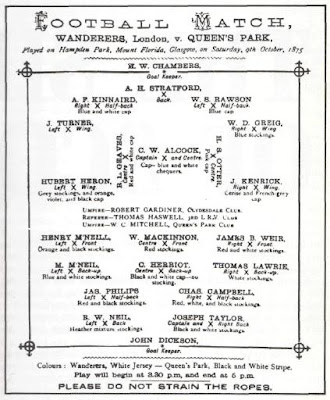 It is interesting to note that, in the three years or so since Queen’s Park first played Wanderers, the number of clubs playing the Association code in the west of Scotland had grown to 120.

On the Saturday after the Wanderers game, Queen’s Park were in Scottish Cup action, defeating Alexandra Athletic 3-0 at . Willie Mackinnon gave Queen's a well-deserved lead at the interval. Tom Highet doubled the lead after the break and, just on time, a third goal was scored from a free kick. It is not known who got the final touch.

On Saturday 30 October, Standard were the visitors to . The score is not entirely clear.  The North British Daily Mail reported a 3-0 win for the home side. However, on the following day, the newspaper printed a letter from the Standard secretary stating that the actual score had been 1-0 for Queen’s Park.

Saturday 6 November saw Northern go down 5-0 at in the second round of the Scottish Cup. The goal scorers are not known.

Two weeks later, Queen’s Park met Rangers for the first time. The game was played at Hampden Park and Queen’s won 2-0 with goals from Tom Lawrie and David McGill. On Friday 12 November, a huge fire in had resulted in the destruction of a spinning mill and a weaving factory.  Around 1,300 people, mainly women and children, had been thrown out of work and rendered destitute.  A fund had been set up for the workers and Queen’s Park agreed to hand over the proceeds of the match to the fund. Over 2,000 spectators paid for admission and the gate receipts amounted to just over £28.

There was a crowd of 3,000, including many ladies, at on Saturday 27 November for the Scottish Cup third round tie with Clydesdale. Queen’s took the lead in ten minutes through a Tennent own goal and Willie Mackinnon got a second shortly before half-time to finish the scoring. Former Queen’s man Robert Gardner in the Clydesdale goal saved his side from a heavier defeat.

Queen’s Park received yet another home draw in the fourth round of the Scottish Cup. Following two postponements due to bad weather, the tie against Dumbreck was played on Saturday 18 December.  The game proved tougher than expected but Queen’s ran out 2-0 winners. Jimmy Weir got the first goal, with the second coming from a maul. The Scotsman reported - "Some splendid play was shown on both sides despite the unfavourable condition of the ground."

On Christmas Day, Queen’s Park beat Clydesdale 1-0 at Kinning Park, with a goal from David McGill.

On Saturday 8 January 1876, the country’s two leading sides, Queen’s Park and Vale of Leven, met at in the fifth round, or semi-final, of the Scottish Cup. The match had been eagerly awaited and the 10,000 spectators “of all classes” included a large contingent who travelled by special train from . Long before kick-off, the ground all around the ropes was crammed with eager spectators. The Glasgow Herald reported that the ladies in the crowd were given seats inside the ropes “but many of them were obliged to remove on account of the rough language used by some of the spectators.” Queen’s took the lead halfway through the first half with a fine David McGill shot but Vale equalised just before half-time with a Lamont header. Queen’s were very much on the offensive in the second half but Vale ‘keeper Wood was in splendid form. However, with 20 minutes to go, a pinpoint Weir cross set up Harry McNeil to fire home the winner for Queen’s Park. Vale of Leven were criticised in the press for the coarseness of their play.

Queen's Park did not return to action until Saturday 5 February when they played a return fixture with the Wanderers at the Kennington Oval in .  The English side deservedly won 2-0 on a particularly narrow pitch. The goalscorers were Charles Wallaston and Jarvis Kenrick. Queen’s took a gamble on the fitness of Jimmy Weir and it backfired badly.  The player was little more than a passenger throughout.

It was over a month before the Queen’s Park first team played again. However, a number of Queen’s players turned out for Glasgow and Scotland.

On Saturday 12 February, the Second Eleven beat the recently-formed St Clements by 3-0 at Baxter Park in Dundee. On the same day, the final trial for the following Saturday’s Sheffield v Glasgow match took place.

Harry McNeil captained the Glasgow side that defeated Sheffield 2-0 at Bramall Lane on Saturday 19 February before 6,000 spectators - the biggest football crowd ever seen in the town. James Phillips and Willie Mackinnon also played.

Then, on Saturday 4 March 1876, Joseph "Joe" Taylor captained Scotland against England at Hamilton Crescent in Partick. Willie Mackinnon, Tom Highet and Harry McNeil were also part of the victorious Scots team. McKinnon, McNeil and Highet were the scorers in Scotland’s 3-0 victory.

hosted another big game on Saturday 11 March when Queen’s Park and the 3rd Lanark Rifle Volunteers contested the Scottish Cup Final. There were fully 10,000 spectators in attendance. The match was expected to be a walkover for Queen’s Park but the team played indifferently. Almost straight from the kick-off, a Queen’s Park clearance was met by Willie Drinnan who, to the astonishment of the crowd, put the Volunteers into the lead. Queen’s improved somewhat in the second half and Tom Highet equalised with one of the goals of the season. Queen’s then attacked incessantly but the game ended in a draw. The Queen’s Park team was J Dickson; J Taylor and R W Neill; C Campbell and J Phillips; T Lawrie, W M Mackinnon, D McGill, A McKinnon, T C Highet and H McNeil.

The Cup Final replay took place at on the following Saturday. The Queen’s Park side showed two changes, with Andrew Hillcoat and T F "Fred" Smith replacing Tom Lawrie and Angus McKinnon.  A crowd of around 7,500 saw a better match than the first encounter. Queen’s early pressure paid off when Tom Highet scored a fine goal in 15 minutes. The same player scored a second 11 minutes into the second half to secure the Scottish Cup for Queen’s Park for the third year in succession.

On Saturday 25 March 1876, Joe Taylor, Bob Neill, Charlie Campbell, Tom Highet, Willie Mackinnon and Harry McNeil all featured in Scotland’s 4-0 win over Wales in Partick. Mackinnon and McNeil were on the scoresheet.

The second eleven were not finished for the season. On Saturday 15 April, they drew 0-0 with Crosshill’s first team at and, two weeks later, beat St Clement’s 3-1 at Hampden, with goals from Greig, Hillcoat and Strang. St Clement’s were considered to be ’s leading Association club.

Immediately prior to the St Clement’ match, played Dumbartonshire (correct spelling at the time) at Hampden, with the proceeds going to the Western Infirmary. Charlie Campbell captained the Glasgow side. Bob Neill, Willie Mackinnon and Harry McNeil also featured. Glasgow won 2-0 and over £100 was raised for the hospital.

* The date of this match is unclear.  It may have been a couple of days earlier than Saturday 5 February.