Queen's Park went into season 1896/97 recognising that, if the club was ever again to host Scottish Cup Finals and major Internationals, a larger stadium was required. With a capacity of only 28,000, Hampden Park was now too small even for Junior Internationals. If the move towards the biggest games being staged at Celtic Park or Ibrox Park was to be reversed, either Hampden Park would have to be enlarged or a new stadium constructed.
Queen's opened their season in customary fashion on Saturday 29 August 1896 with an understrength eleven playing a "missionary" match. The Spiders' opponents were Fair City Athletic. This was Queen's Park's first visit to Perth in ten years and the game attracted a crowd of 3,000 to Balhousie Park. Queen's had by far the best of the play but ended up losing 1-0. The goal came a minute from half-time through Scully. Queen's bombarded the Fair City goal in the second half but all attempts to score ended in failure. 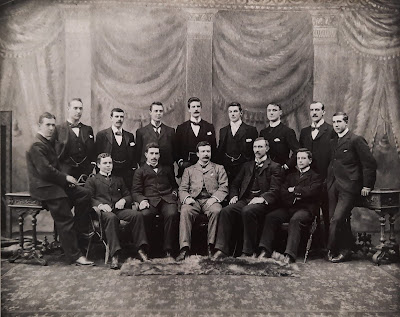 Queen's Park were at home to Celtic in the Glasgow League on Saturday 17 April. Despite threatening weather, a crowd of around 10,000 turned out for the game. Early in the match, James Irons sprained his ankle and could take no further part. However, even with ten men, Queen's more than held their own. There were no goals in the opening half but Bob McColl fired a penalty kick high over the bar after Willie Stewart had been tripped by Dan Doyle. With the wind advantage after the break, Queen's Park assumed the offensive and took the lead when Robert Lambie slipped through the Celtic defence and scored with a quick low shot. Robert's older brother Willie then made the score 2-0 with a fierce drive. By this point, Davie Stewart was limping badly but Queen's held on for a deserved victory. Celtic had a dangerous spell near the end but their shooting was erratic.
Two days after the Celtic game, a fairly strong Queen's Park side travelled down to Dumfries to play Nithsdale at Cresswell Park. Despite drizzle throughout, the match attracted the largest crowd in Dumfries for a considerable time. Queen's won 5-0, with goals from Bob McColl (2), Willie Stewart, Alex Christie and Robert Lambie.
On Saturday 1 May, Queen's Park had a home match with Third Lanark in the Glasgow League "before a gratifyingly large crowd". After Willie Lambie had missed two good chances, Bob Hamilton gave Queen's the lead after good play by Bob McColl. Five minutes from half-time, former Spider Tom Gibbons drew Third Lanark level with a fine shot. Then, in 50 minutes, John Dunlop, looking offside, gave the Volunteers the lead. Queen's equalised with a beautiful Willie Lambie shot after a great run up the wing. Queen's went close time after time and finally went ahead in 75 minutes when Bob Hamilton struck from a McColl assist. Seven minutes later, Hamilton returned the favour for Bob McColl to make the final score 4-2 for the Spiders.
Queen's Park's final Glasgow League fixture took place at Celtic Park on Monday 3 May 1897. A crowd of over 14,000 saw Queen's take an early lead with a Bob Hamilton header from a Robert Lambie cross. The match was keenly contested but the Spiders were doing most of the attacking and Hamilton doubled the advantage before the interval with a beautifully taken goal. In 60 minutes, Bob McColl carried the ball the length of the pitch and passed to Bob Hamilton who scored a third for Queen's. With ten minutes to go, Hamilton was on target once more to take his personal tally to four goals and complete a stunning and well-deserved 4-0 victory. Queen's Park were champions of the Glasgow League.
The Queen's Park side that clinched the Glasgow League championship at Celtic Park was - Kenny Anderson; John Ritchie and John Gillespie; Bob McFarlane, Alex Christie and Davie Stewart; Robert Lambie, Hugh Butler, Bob McColl, Bob Hamilton and Willie Lambie.

Following their Glasgow League triumph, Queen's Park were favourites to win the Glasgow Merchants' Charity Cup but it was not to be. Queen's had been drawn against Third Lanark at the semi-final stage and the match took place at Rangers' Ibrox Park on Saturday 8 May. The Spiders were without Bob Hamilton, Willie Stewart and James Irons. Third Lanark drafted in James Gillespie, Jimmy Hannah and Bob Johnstone of Sunderland. The inclusion of Anglos in Charity Cup teams was controversial and there were calls for the rules to be changed. What turned out to be a poor first half for Queen's Park got off to an inauspicious start when Alex Christie, who was playing with an injured foot, was eleven minutes late in arriving. Third Lanark took the lead when Queen's goalkeeper Kenny Anderson fumbled a Bob Johnstone shot into the net. The 'keeper was again at fault when he missed a cross and Jack Peddie headed goal number two. Matters went from bad to worse for the Spiders when James Gillespie made the score 3-0 for the Volunteers at the interval. Queen's Park took the game in hand on the resumption and pulled a goal back when a John Ritchie free kick was deflected in off Robert Barr. Queen's had lots of possession for the remainder of the game but their shooting was poor and they slumped to a highly disappointing 3-1 defeat.
There was some success for Queen's Park in the aftermath of the Charity Cup defeat. On Friday 14 May, the club's second eleven, the Strollers, beat Third Lanark 'A' 3-1 before a crowd of 3,000 in the Glasgow Reserve Association Cup Final at Cathkin Park.
A new league competition had been established in season 1896/97 - the Scottish Combination. It comprised the second elevens of Celtic, Hearts, Queen's Park and Rangers, together with the first elevens of East Stirlingshire, Falkirk, Hamilton Academical, Royal Albert, Stenhousemuir and Wishaw Thistle. The Queen's Park Strollers finished in seventh place, with seven wins, two draws and nine losses.
On Saturday 15 May, Queen's Park travelled north to play Aberdeen at Chanonry. A large crowd saw Queen's win 8-1.
Queen's Park's Annual General Meeting took place in the UP Church Hall in Langside Road on Thursday 27 May 1897. The club's membership was 640. James Lawrence was elected President and the credit balance was £2,051 6s 2d - the largest ever achieved by the club. The playing records for the season were: First Eleven - played 34, won 19, drawn 6, lost 9; Strollers - played 33, won 18, drawn 3, lost 12; Hampden XI - played 28, won 14, drawn 6, lost 8; Victoria XI - played 26, won 8, drawn 4, lost 14.
Queen's Park would not be joining the Scottish League in season 1897/98. A small section of the membership wanted to join the league. However, it was felt by the majority that regular competitive football was not in the best interests of the playing members. If injured playing hard games week after week, absence from work could have serious financial consequences.
Following the loss of two players to Third Lanark earlier in the season, striker Bob Hamilton and reserve goalkeeper James Yuille signed for Rangers. The exodus of players to professional clubs, which would become all too common, was now under way.
Queen's Park held their first Sports event in some years on Saturday 5 June. The programme was confined to amateurs and the attendance of 5,000 or so was disappointing. Professional athletes were more of an attraction.
Results 1896/97