1873/74 was another momentous season for Queen’s Park, with the club acquiring its own ground, being instrumental in the foundation of the Scottish Football Association and winning the inaugural SFA Challenge Cup (Scottish Cup).

In a preview of the new season, the North British Daily Mail said “Our leading Association Club, the Queen’s Park, have been very busy with practice matches, and with a considerable accession to membership, and a rescheduled eleven from that which was unexceptionally powerful last year, great things are, of course, naturally expected, and judging from the splendid form already shown by the bulk of the members, the clubs who come into contact with this celebrated club during the season will have sufficient work to do”.

The first game of the season was against another side from ’s southern suburbs – Dumbreck.  The match was notable on two counts – it was the first to be played at Queen’s Park’s new private ground and it was the club’s first ever match in the new Scottish Football Association Challenge Cup.

On 2 June 1873, Glasgow Town Council’s Parks Committee considered Queen’s Park's application for the use of a portion of the Queen’s Park east of Langside Road as the club’s private football ground. This is believed to have been in the vicinity of the new Victoria Infirmary. The application was refused. On 30 June, the Committee considered a further application from Queen’s for the portion of the park east of Cathcart Road (the road took a straighter route in 1867). This was again refused. Queen’s persisted and, on 1 October, had an offer to rent or lease the park east of refused on the basis of “it not being considered expedient to disturb the arrangement at present existing with the grazier to whom this Park is let”. On this occasion, however, when the Parks Committee minutes were brought to the full Town Council, the decision to refuse the Queen’s Park application was remitted back to the Committee for reconsideration and Queen’s Park had their ground “… until the 1st day of May next, at a rent of £20 for the ground, on condition that they maintain the fences of the said Park and do not sub-let it without the consent of the Committee”. The ground was named Hampden Park.  (The exact location of the first Hampden Park had long been a mystery until Graeme Brown of Hampden Bowling Club found conclusive proof that the site of the ground was the area of land now occupied by the bowling club.) 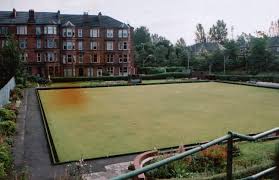 
There has been some uncertainty about the reason for naming the new ground Hampden Park. In the Scottish Football Annual for 1880/81, an 'Old Black and White' gave this explanation - "When writing out the advertisement for the first match, the puzzle was to say where the match would be played, for the field had no name. To save trouble, the name of the nearest block of buildings was put down."

The International match in 1872 had persuaded Queen’s Park that Scottish football would be better supervised by Scots clubs gathered in their own Association. In February 1873, Queen’s Park secretary Archibald Rae wrote to Scottish clubs proposing the formation of a Scottish Football Association and the establishment of a Scottish Cup competition in the following season. Eight clubs attended a meeting in response to Rae’s letter and the SFA was born.

A total of 16 teams entered the first Scottish Football Association Challenge Cup competition. The clubs taking part were invited to contribute towards the cost of purchasing a trophy and badges.  (Medals were always referred to as badges in those days.) A total of £56 12s 11d was raised, including a £5 contribution from Queen's Park. This enabled the newly-formed SFA to purchase the Scottish Cup, now the oldest soccer trophy in the world.

Queen’s Park opened their season at their new private ground with a 7-0 win over Dumbreck in the Scottish Cup on Saturday 25 October 1873. The goals were scored by Thomas "Tom" Lawrie, Willie Mackinnon (2), Harry McNeil (2) and Andrew Broadfoot. The other goal was scored by either Lawrie or Robert Leckie depending on which report you read. The North British Daily Mail commented - “ is a capital place for football and the turf, with a little care and judicious expenditure, may easily be made all that can be desired.”

Queen’s wore their new uniform for the first time at the Dumbreck match. The members of the club did not like the original strip and had decided a month previously to change to the black and white horizontal stripes or hoops worn to this day. The old blue uniform was to remain the Scotland strip.

Queen’s suffered a blow when club captain William Ker announced that he was leaving Glasgow to take up a position in Canada.

Queen’s Park’s next game on 22 November 1873 was again a Scottish Cup tie at Hampden Park.  Their opponents on this occasion were Eastern, one of the best Association clubs, and a tough game was expected. Queen’s had Eastern under siege throughout but could not make the breakthrough until, with darkness descending, Jimmy Weir dribbled through the visitors’ defence and scored with an unstoppable shot. The North British Daily Mail reported - “The Queen’s Park were in their new colours (black and white stripes) on Saturday, and the costume had a nice, clean appearance.”

On Saturday 6 December, Queen’s Park travelled to Kilmarnock and beat the local side 9-0, with goals from Willie Mackinnon, Jimmy Weir (2), Tom Lawrie (2), Harry McNeil (2) and Bob Leckie. The other goal came when Queen’s were awarded a free kick for handling a yard from goal.  “Mr Weir took the kick, and just touched the ball, and he and all the Queen’s Park forwards dashed in, and carried both ball and opponents through goal.” (North British Daily Mail)

On the following Saturday, Queen’s met Renton in the third round (semi-final) of the Scottish Cup at Hampden Park. There was a good turnout of fans, with the Glasgow Herald commenting - “The seemed to have immigrated for this occasion.”  were strong defensively but the Queen’s goalkeeper handled the ball only three times in the entire match. Queen’s had numerous shots at goal and eventually won 2-0, both goals scored by Willie Mackinnon.

On the Saturday before Christmas, the Western club visited and were beaten 8-0. The scorers were Angus McKinnon (3), Jimmy Weir (2), Bob Leckie (2) and Harry McNeil. The Second Eleven could not quite match this scoring feat but came very close in beating 2nd Western 7-0 at Regent’s Park in Partick, with goals from John Wotherspoon (4), Walter Lawrie, W S Rae and Archibald Rae. The Queen’s Park keeper did not touch the ball once. After a week of rain, the ground was said to have been better suited to swimming. The Glasgow Herald joked that “at the end of the game an innocent onlooker guessed that the players had been qualifying for the Christy Minstrels”.

Queen’s Park were keen to promote the Association game in other parts of . On Saturday 27 December, a match was played at the High School Ground in Bonnington in an endeavour to introduce the dribbling game to Edinburgh, where the rugby code had now been universally adopted.  The two teams consisted of players from Queen’s Park, Clydesdale, Eastern, Granville and Vale of Leven. Mr Gardner’s Team beat Mr Thomson’s team 1-0, with Angus McKinnon the goalscorer. Although the crowd was only around the 400 to 500 mark, the match excited much interest amongst the numerous Edinburgh footballers present. The Edinburgh Football Association was established soon afterwards.

The report of the Edinburgh match in The Scotsman contained this interesting remark - "With some slight alterations and definitions of terms, the game is substantially the old Scotch style of football, which may commend it more to Scotchmen."

Queen’s Park’s first match of the New Year was against Blythswood at Burnbank on Saturday 17 January 1874. The Burnbank ground was located on the south side of near Cross. The large crowd present were also watching 2nd Glasgow Academicals play Lenzie at rugby on an adjacent part of the ground.  Queen’s Park won 1-0 with a goal not long before the close of play. Queen’s got the ball to the mouth of the Blythswood goal and, amid great excitement, sent the ball and their opponents under the tape “with the whole of the forwards and most of the backs crushing a goal by clear strength” (Glasgow Herald). Over at Hampden Park, the Second Eleven had no such problems in beating 2nd Blythswood 9-0, with the prolific John Wotherspoon scoring six times. 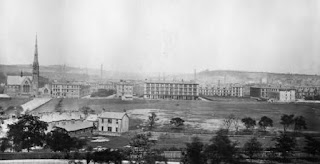 On the following Saturday, both Queen’s Park teams went goal crazy against Alexandra Athletic.  The First Eleven won 10-0 at in the “eminently respectable suburb of Dennistoun”.  The Second Eleven went one better, thrashing 2nd Alexandra Athletic 11-0 at . The goalscorers in the two games are not known.

On Saturday 7 February 1874, Queen’s Park had an easy 4-0 victory over Kilmarnock at Hampden Park, with the goals coming from Harry McNeil, Charlie Campbell, Tom Lawrie and a “combined rush”.

On the following two Saturdays, most of the Queen’s Park first team players were involved in trial matches for the upcoming Scotland v England and Sheffield v Glasgow matches.

A week later, the first ever representative match between Glasgow and Sheffield took place at Bramall Lane. The Glasgow side was at a disadvantage as the match was played under Sheffield rules. A crowd of over 5,000 saw a closely-contested game that finished 2-2.  Joe Taylor, James Thomson, Charlie Campbell, Jimmy Weir, Angus McKinnon, Willie Mackinnon and Harry McNeil played for Glasgow, with Weir scoring the second equalising goal.

The Queen’s Park senior side was back in action on Saturday 21 March and the occasion was the first ever Scottish Cup Final. An enthusiastic crowd of some 3,000 gathered at Hampden Park to see the country’s two leading sides, Queen’s Park and Clydesdale, battle for the trophy. This was the first meeting of the two clubs. In the early stages of the match, the players struggled with the extremely bobbly pitch and strong gusty wind. The first major incident of the game came after 30 minutes.  Clydesdale’s Fred Anderson shot for goal and the ball was scrambled away. Clydesdale claimed that the ball had not been cleared by the Queen’s Park goalkeeper, John Dickson, but had rebounded off a spectator behind the goal. One umpire signalled a goal but the other disagreed.  Referee James McIntyre of the Eastern club settled the dispute by ruling in Queen’s Park’s favour.

In the second half, Queen’s Park had the wind advantage and pressurised the Clydesdale defence.  Only great goalkeeping by the Kinning Park side’s captain Robert Gardner, the former Queen’s Park favourite, kept the scores level. However, the gallant ‘keeper was finally beaten with 20 minutes remaining when Willie Mackinnon finished off a nice piece of play. Queen’s made sure of victory when Bob Leckie took a pass from Jimmy Weir and fired home a fine left-foot shot. The final had begun in unpromising fashion but had developed into a first-class advertisement for the sport of Association football.

Queen’s Park’s First Eleven’s final match of the season took place on Saturday 4 April 1874 when Eastern were beaten 3-0 at Hampden Park in a one-sided game, spoiled greatly by a strong wind.  Charlie Campbell got one of the goals with a long shot. The scorers of the other two goals are not known.

The closing match of the season came on Saturday 11 April when the Queen’s Park Second Eleven defeated Rovers first team 2-0 at .