The first action of season 1894/95 for a number of Queen's Park players was a benefit match at Celtic Park on Saturday 4 August 1894 between Celtic and a Queen's eleven selected by club president William Sellar. Despite threatening weather and various counter-attractions, a crowd of around 4,000 turned out for the game. The Spiders' team was a mixture of first eleven and second eleven players, as well as new recruits Hughie Smith from Third Lanark and Henderson from Battlefield. Play was pretty even for most of the opening half but Celtic got on top just before half-time and Joe Cassidy put them into the lead. Shortly after the restart, Johnny Hamilton equalised with a stunning 25 yard shot. Barrett in the Queen's goal had several good saves and Tommy Waddell missed a great chance for the Spiders but there was no further scoring.
A week later, a scratch Queen's Park side beat Kilmarnock Athletic 3-2 before a large crowd at Holm Quarry in Kilmarnock. On the following Saturday, Queen's Park were at Holm Park in Newton Stewart facing local side Newton-Stewart Athletic. There was said to have been a very large turnout at the game. A fairly well-represented Spiders' side were 2-0 ahead at half-time through Stevenson and Sellar. The final score was 6-0, or possibly 7-0.
Queen's Park's first serious match of the season came on Saturday 1 September when near-neighbours 3rd Lanark Rifle Volunteers, now generally simply known as Third Lanark, were visitors to Hampden Park. The 6,000 spectators saw Queen's make the early running but it was the visitors who took the lead through Robert Barbour. Play was even for a spell but Third Lanark doubled their lead before the interval. After the break, the Volunteers extended their lead to to 3-0 from a scrimmage. Queen's Park began to take control of the play at this point. Willie Lambie shot widely over the bar and then a Henderson shot hit the woodwork. In the last 15 minutes, the Spiders pulled two goals back, through Henderson and Muir, but, try as they might in the closing minutes, they could not find an equaliser.
On Saturday 8 September, Queen's Park opened Linthouse's new ground Govandale Park. A crowd of around 2,500 saw the Spiders claim a 2-1 victory. Queen's took the lead through a Henderson penalty kick but Steel equalised before half-time with a long-range effort. The Spiders' winner came out of a scrimmage. 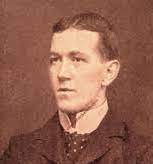 Queen's Park played their last competitive match of the season on Tuesday 14 May 1895. The occasion was a Glasgow Merchants' Charity Cup tie with Celtic at Hampden Park. The game was vigorously contested throughout and excitement was intense among the crowd of 15,000. There were numerous chances at both ends in the first half hour or so but a goal did not come until the 37th minute. It was Celtic who got it when a Tommy Morrison centre resulted in a stramash in front of goal and the ball took an unfortunate bounce through the posts. Queen's Park had the better of the second half and were unlucky not to score but the result at the final whistle remained 1-0 for Celtic. A draw would have been a fairer result. Queen's had won two of the four official games with Celtic in the course of the season but the Parkhead men had come out on top in the two that really mattered. The Spiders side that exited the Charity Cup was - K L Anderson; W H Sinclair and H F Smith; J Gillespie, R McFarlane and J Allison; W Gulliland and T S Waddell; R S McColl; W A Lambie and W S Stewart.
There were delays and congestion as supporters queued to enter Hampden Park for the Celtic game. The Scottish Referee called for a drastic improvement in the entrances to the ground, with a need to double the number of turnstiles.
On Saturday 18 May, only nine days after their meeting at Hampden Park, Queen's Park and Heart of Midlothian faced one another at Tynecastle Park and played out a 1-1 draw. The Queen's side was close to a second eleven. George Scott gave the Edinburgh men the lead in the 46th minute but, in the dying seconds, either Tom Crookston or Willie Stewart struck the equaliser. The Scotsman was not impressed by  the afternoon's entertainment, describing the fare provided as "... probably the worst game ever played at Tynecastle, or anywhere else for that matter."
Queen's Park's last action of the season came on Tuesday 21 May when a young Spiders eleven met Johnstone at Newfield Park in a match to raise funds for the Renfrewshire club. A hard-fought and exciting game ended in a 3-2 win for Queen's Park. 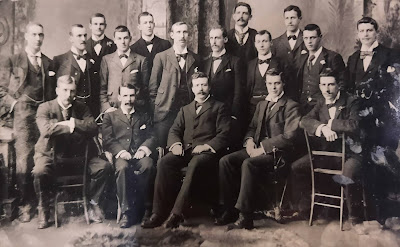 Queen's Park - Season 1894/95
Back row - A Stewart, R S McColl, H Smith W G Stewart.
Middle row - C B Miller, J Allison, K Anderson, J Gillespie, R Smellie, W Gulliland, J Cameron, W Sinclair.
Front row - D Sillars, T S Waddell, W Sellar, W A Lambie, D Stewart.
At the Queen's Park AGM on Thursday 30 May, William Sellar was re-elected as President. The club's accounts showed a balance of £455 18s 3d.
Queen's Park's annual sports had been due to take place on Saturday 1 June but were cancelled following a dispute between the two athletic bodies, the SAAA and the SAU.
At a Special General Meeting on 12 June, John Hamilton and William Clelland were expelled from the club for having signed professional forms with other clubs.
Finally, on Monday 17 June 1895, at a meeting of the International Board in the Alexandra Hotel in Glasgow's Bath Street, the rule on throw-ins was clarified - "... the player, when throwing the ball, must be standing on the touch line, and must not be allowed a run." Also, goalkeepers were to be given more protection and could only be charged when in possession of the ball.