As the start of season 1898/99 approached, The Scottish Referee made reference to Queen's Park's lonely position outside the Scottish League structure. The publication commented on Queen's now advertising for fixtures when, in times gone by, the club's difficulty was in having to turn down the numerous sides anxious to play against the Spiders. There was speculation about the possibility of Queen's joining the Scottish League in season 1899/00.
Queen's Park's closed sports, restricted to members of the club, took place at Hampden Park on 16, 17 and 18 August.
Queen's Park's first outing of the season was on Saturday 27 August 1898 with a trip to Kirkcudbrightshire to play Castle Douglas Wanderers. The Spiders won 12-2. Vernon and Richardson were on target for the Wanderers but the Queen's scorers are unclear. However, it is known that Bob McColl got at least five of the goals.
On the following Saturday, Queen's Park welcomed fellow amateur side Ayr Parkhouse to Hampden Park. The 2,000 spectators were treated to a feast of goals, with Queen's winning 7-5. Bob McColl scored six of the Spiders' total, with David Wilson getting the other goal. Fyfe scored a hat trick for Parkhouse, with the other two goals coming from Spence and Long. 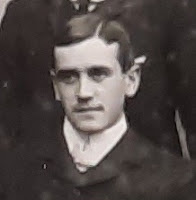 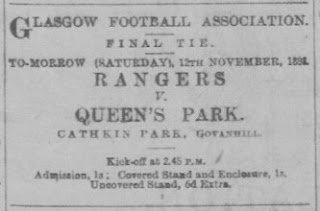 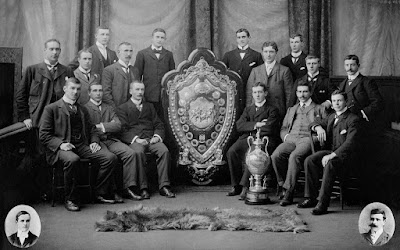 Queen's Park - Season 1898/99
Back row (from left) - T A Bowie, D Berry, D Wilson and J F Templeton.
Centre row - C B Miller (Secretary), W S Stewart, J Gillespie, J Walker, J Clarkston and A McE Swan.
Front row - K L Anderson, R A Lambie, J Lawrence (President), R S McColl, D Stewart and J H Irons.
Inserts - W H Waller and A J Christie.
On Saturday 18 March, Bob McColl and Dyke Berry were in the Scotland side that beat Wales 6-0 in Wrexham. McColl scored a hat trick in the match. Queen's Park, with Tom Bowie and Gladstone Hamilton in place of McColl and Berry, played a Glasgow League match with Clyde at Shawfield Park. A crowd of around 5,000 saw the home side take the lead in ten minutes through Alex Crawford. After a further ten minutes, Tom Bowie equalised for the Spiders after good work by Hamilton and Robert Lambie. Queen's Park won the game in the second half by means of a rocket shot by Willie Stewart. Clyde won a number of corner kicks near the end and were unfortunate not to earn a draw.
Queen's Park were not in action on Saturday 25 March as snow wiped out the fixture list. There was one exception - Scotland v Ireland at Celtic Park. The snow was cleared from the Parkhead pitch to allow the game to go ahead. Dyke Berry, Alex Christie and Bob McColl played in a 9-1 victory for Scotland. Bob McColl scored three of the goals and Alex Christie was also on the scoresheet.
The final trial for the Scotland side to face England took place at Cathkin Park on Tuesday 28 March. The Home Scots beat the Anglo-Scots by three goals to one. There were no Queen's Park players involved.
Partick Thistle were Queen's Park's opponents in the Glasgow League on Saturday 1 April. A crowd of around 2,000 at Meadowside saw Queen's fail to take advantage of early opportunities. However, they eventually took the lead in 30 minutes through Robert Lambie. Just before the break, Bob Gray equalised for Thistle. The same player missed an early chance in the second half but Queen's then picked up their performance and two Tom Bowie goals, the first a fine individual effort, gave them a 3-1 victory.
Two days later, on Easter Monday, Queen's Park were south of the border for a challenge match with Sheffield Wednesday. Heavy showers restricted the crowd at Olive Grove to around the 5,000 mark. The match was very competitive from start to finish but both sides' shooting was weak. The first half was even. Wednesday applied a fair amount of pressure in the second period but Queen's should have won the match towards the end. Bob McColl brought out a magnificent save from Jimmy Massey in the Wednesday goal. The ball rebounded straight to James Templeton but he somehow shot wide of the empty net. Then, in the last minute, three Spiders' forwards completely missed an inviting ball across goal and the game finished in a 0-0 draw. 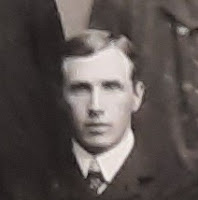 James Templeton
Queen's Park's second eleven, the Strollers, were also in England on Easter Monday. They were in Nottingham and beat Nottingham Forest Reserves 4-1 at the City Ground.
Queen's Park and Sheffield Wednesday met again at Hampden Park on Saturday 8 April. The 7,000 spectators were treated to an exciting ninety minutes. Queen's, with the benefit of the wind, were on top in the opening half but their shooting was wayward. They did, however, manage one goal through Tom Bowie. Wednesday were the better side in the second half and the Spiders' latest goalkeeper W Watt had to be on his mettle. The Queen's defence held firm and the match ended in a 1-0 victory.
A week later, Queen's Park and Third Lanark met at Hampden Park in a Glasgow League fixture. Queen's faced a strong breeze in the first half. The Spiders were noted for the quality of their play against the wind and led 1-0 at the break. Bob McColl was the scorer with a fierce drive. In 60 minutes, the same player doubled the lead after the finest move of the match. It was a deserved 2-0 win for Queen's Park before a crowd of some 8,000.
It was the Spiders versus the Wasps on Saturday 22 April when Queen's Park travelled to Alloa in Clackmannanshire to play Alloa Athletic. There was a record crowd of over 3,000 at the Recreation Grounds, with spectators five deep in places. Queen's won 2-1. Bob McColl scored both of the Spiders' goals, with Henderson replying for Alloa.
Queen's Park's Glasgow League campaign continued on Saturday 29 April with a visit to Ibrox Park to take on Rangers. A high wind and a heavy pitch spoiled the game to some extent for the 12,000 spectators. In the first half, Rangers' goalkeeper Matt Dickie brought off several excellent saves before finally being beaten by a fine Willie Stewart drive. Queen's started the second half well but Rangers began to press and Neilly Gibson equalised from a free kick. Queen's forced the pace after that but, with Dickie in top form, the match ended in a 1-1 draw. On that same afternoon, Rangers 'A' became champions of the Scottish Combination League with a 4-1 win over Arthurlie.
Queen's Park now had three Glasgow League matches in eight days, each at Hampden Park. On Wednesday 3 May, Partick Thistle were the visitors. Queen's took the lead in four minutes. Willie Stewart was the scorer after a fine passing move. Shortly afterwards, Thistle's Willie Paul collided with one of his own team-mates and was unable to take any further part in the game. The ten men defended pluckily but Bob McColl doubled the Spiders' lead before half-time with a fine individual effort. The second half consisted almost throughout of a series of Queen's Park attacks. Bob McColl scored a further twice to make the final score 4-0.
Clyde were Queen's opponents on Saturday 6 May. With a strong wind at their backs, the Spiders applied constant pressure in the opening half but their finishing was poor. It was a similar story in the second half. Despite hitting woodwork several times, Queen's Park failed to score. They were made to pay with three minutes remaining when Clyde broke away and Martin Moran found the net. Queen's had contrived to lose a match they had been expected to win easily.
Celtic were the Spiders' Glasgow League opponents on Wednesday 10 May. Queen's were without Alex Christie, John Gillespie and Robert Lambie. A crowd of around 7,500 saw Celtic take the lead through Harry Marshall in only three minutes. Further goals from Johnny Campbell and John Divers made the half-time score 3-0 for visitors. Queen's Park played a bit better after the interval and Willie Stewart pulled a goal back. The Spiders looked likely to further reduce the deficit but goalkeeper Walter Henderson gifted John Hodge a goal. Then, in the last few minutes, Pat Gilhooly made the final score 5-1 for the visitors. It was a very disappointing Queen's Park display and left Celtic as champions of the Glasgow League.
On Saturday 13 May, Queen's Park made the trip to Dunblane to play the local side at Duckburn Park. The match finished in a 2-2 draw. A strong Queen's side were twice behind.  Guthrie got both goals for Dunblane, with Dyke Berry also scoring twice for the Spiders.
Two days later, on Monday 15 May, the closing fixture of the Glasgow League took place at Hampden Park between Queen's Park and Rangers. Despite the pitch being very heavy, the two sides provided an entertaining encounter for the 4,000 spectators. Neither side was at full strength. Rangers took an early lead through Tommy Hyslop. Bob McColl equalised shortly afterwards but Jack Wilkie then put the Light Blues back ahead. Bob McColl tied the scores from a penalty kick before half-time. Early in the second period, John Campbell put Rangers 3-2 up and Hyslop added a fourth ten minutes later. Willie Stewart made the score 4-3 and Queen's then made a big effort to draw level but the Rangers' defence was too strong. 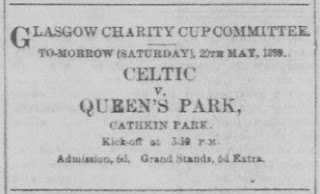 Queen's Park had been drawn against Celtic in the semi-final of the Glasgow Charity Cup and the match took place at Cathkin Park on Saturday 20 May 1899. The Spiders' side that took the field against the favourites to win the competition was - Wilf Waller; John Gillespie and David Stewart; James Irons, Alex Christie and James Templeton; Willie Stewart, David Wilson, Bob McColl, Dyke Berry and Tom Kennedy. A crowd of over 17,000 saw Queen's, with the benefit of a strong wind, press for much of the opening half but unable to score. Celtic got the only goal of the half when either Johnny Campbell or Jim Welford got the final touch to a free kick. Play was even in the early stages of the second period but Queen's lost a second goal from a Sandy McMahon shot that Wilf Waller should have saved. Celtic were now on the ascendancy and Campbell scored a third goal for his side with a fine shot off the post. Queen's now appeared somewhat demoralised and Sandy McMahon made the final score 4-0. It was a disappointing way for the Spiders to end the season.
Although the season had officially ended, Queen's Park had one further game. It was a charity match with Third Lanark at Cathkin Park in aid of the National Burns Memorial and Cottage Homes, Mauchline. A healthy crowd of 4,000 attended the match, which Queen's won 2-1 with two Willie Stewart strikes. The Third Lanark goal came from a scrimmage.
The Queen's Park Sports took place at Hampden Park on Saturday 3 June. The competitors were all amateurs. The sports were a success but the absence of professional athletes resulted in the attendance being good rather than exceptional.
At a meeting of the Glasgow League, it was decided to dissolve the league and replace it with an Inter-City League. There would still be six clubs in the new league, with Heart of Midlothian and Hibernian replacing Clyde and Partick Thistle.
The outstanding question at the conclusion of the season was whether Queen's Park would now join the Scottish League. One stumbling block was that Queen's were reluctant to travel on a Saturday before 12 o'clock.